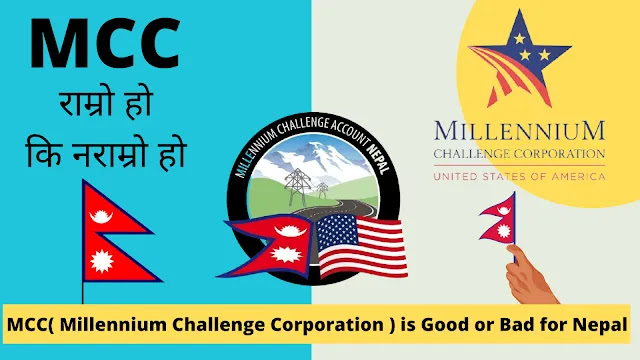 Millennium Challenge Corporation (MCC) is an innovative and independent U.S. foreign agency created by the U.S. Congress in January 2004 with strong bipartisan support. The only motive of  Millennium Challenge Corporation (MCC) is to help and lead the fight against global poverty. Not only this but MCC also focuses on good country policies, ownership, and as well as results. MCC is especially for developing countries whose are lack behind in their main development source like road, electricity, education, create more job opportunities in countries. I think MCC is a good investment for the American people.
$ads={2}
Note:- This article is made for an educational purpose. So, take it as a knowledge base. We do not support or protest any person, country, or third party.
{tocify} $title={Table of Contents}

What is different about Millennium Challenge Corporation (MCC)?

As I already told you the Millennium Challenge Corporation (MCC) is made for developing countries that are in the process of good government, economic freedom, and as well as investing in their citizens. But, MCC has its own criteria to select the country to make a part of it. I will list the points below:
Millennium Challenge Corporation (MCC) is a grant for five years only to selected countries after meeting the MMC’s criteria. After the grants MCC, it will promote cross-border economic integration and also increase regional trade.
People Also Read:- Credit Card/Debit Card Fraud Using FACEBK(Facebook) Payment Account

Millennium Challenge Corporation (MCC) has its own criteria. The main thing is they use policy indicators to access country performance to meet MCC eligibility criteria. If the country performs better than a medium score on its income then it is considered a “pass”.
Case of passing the MCC only if
You have to notice the point that a country’s inflation rate must be under a fixed ceiling which is 15%. Not only this the Immunization rates of a country must have coverage above 90%. And the political rights and civil liberties of a country must meet a score above 17 or 25.

Which sector will be developed after passing the Millennium Challenge Corporation (MCC)?

MCC has invested more than $13 billion in compact and threshold programs worldwide and after passing the MCC in any country this project start to tackle the main challenges like a supply of electricity, safe and clean drinking water, women education, building roads, development in agriculture and many more like this. I write some lists below check that out.

What is the Treaty between the USA and Nepal regarding MCC( Millennium Challenge Corporation )?

As Nepal has a strong commitment to democracy, good government, and economic freedom, MCC has selected Nepal for its support. According to the study of 2013-2014, it shows that MCC concluded the energy and transportation is the major sector for higher economic growth that’s why they want to develop this two-sector in Nepal. Passing through the overall political and bilateral relation, MCC select Nepal directly for the compact program in December 2014 but not passing through any threshold program. The office of MCC has opened in April 2015 and a country director was assigned in  Oct 2015 to start the activities in Nepal.
The studies to identify the project is held in 2016-2017 and it was submitted to the MCC board in November 2016. After the successful meeting among Nepal and MCC at Washington DC in June 2017, the MCC board of directors approved Nepal Compact Program worth $500 million in August 2017.
Finally, the compact agreement is done on Sep 14, 2017, in Washington DC between Nepal and MCC in the presence of Finance Minister Mr. Gyanendra Bahadur Karki and MCC Acting CEO Mr. Jonathan Nash singed the compact agreement. According to that agreement, Mcc construct 300km roads in the various alignments of Mechi, Koshi, Sagarmatha, Tribhuvan Rajpath, and East-west highway and made up to 400 kV transmission lines from Lapsiphedi, Galchhi, Damauli, Sunawal along with 3 substations.
Up to $500 million is a grant by MCC and $130 million is paid by Nepal Government according to the contract. The altogether Budget for this project gonna be $630 million and $130 million goes to the road sector and $500 million goes to the Energy sector.

Is MCC a part of the Indo-Pacific Strategy?

Many of you might be heard about the Indo-Pacific Strategy (IPS) along with Millennium Challenge Corporation (MCC). So, what are the IPS actually and does this affect our country? First thing MCC and IPS both are totally different and established with a different purpose. The Indo-Pacific Strategy is the department of Defense’s priority theater. And according to the Last year, June report IPS is linkages between security, governance, and economics of any country.
Though IPS doesn’t talk about the MCC, the compact is a part of it. According to the experts of the Nepal office of the MCC, they consider the MCC as the economic part of the IPS. They also talk about the MCC doesn’t necessarily part of the “Military Alliance” and the economist also tell that if there is any economic offered to Nepal they have to accept due to their economic condition.

MCC( Millennium Challenge Corporation ) is Good or Bad for Nepal?

MCC is good or bad for Nepal this one is the most important topic and the reason for the clash nowadays. If we talking about the good side of MCC then after the implementation of MCC country’s economy will definitely grow to compare to the present situation but it is not sure that we use that infrastructure and development freely like we do now because of IPS.
It is still not clear that IPS are connected with MCC or not but it may be clear to many that if MCC came to Nepal then it definitely bring IPS with them. And in the agreement, it is clear that while MCC works the Nepal government rule cannot do anything. Nepali move under the rule of MCC which is not good.
They have the right to destroy our old cultural heritage, our natural beauties, and do many more. Imagine if the US military force destroys all over Nepal and all Nepali have to run away from Nepal. Do you think you want this situation in the coming future? If not then “Say No To MCC“.
If the MCC concept is only to develop the developing countries then they must give the 1st priority to the host country’s law and the military force of the USA has not interfered with that host country. If this not gonna change and they are stuck in their own decision then in that situation MCC is not healthy for Nepal and any other countries because we see the many countries who suffer large destruction after entering a military force in any country.
Note;- Now, you can tell me you are in favor of MCC or not in the comment box below. Share this article with your friends and know what they think.