5 Most Important E-Sports Events of 2021

Esports which is also known as electronic sports, e-sports, or eSports is a form of competition using video games. Esports often take the form of organized, multiplayer video game competitions, particularly between professional players, individually or as teams.

People also read:- Best photo-editing apps for android and iPhone you might don’t know in 2020

Who is the founder of esports?

ESL along with multiple eSports teams in 2016.

After knowing the brief about esports now we are going to know about the different esports games played worldwide.

4) Heroes of the Storm

Where’s the money in eSports?

According to figures from the Global Esports Market Report 2020, the following are the result of the year 2020.

2) In 2020, $822.4 million in revenues or three-quarters of the total market will come from media rights and sponsorship.

4) Mobile esports enjoyed a huge spike in the past year, with emerging markets like Southeast Asia, India, and Brazil at the forefront of this growth.

The business expansion also had an impression on the sports betting market. In QYResearch’s Global eSport & Sports Gambling Market, Key Trends and Opportunities to 2026, it had been reported that e-sports gambling was valued at $ 142 million, but that in 2021 it’ll start to grow 6.2% annually until reaching 203 million in 2026.

ALSO READ:- The Pump Shotgun is back in Season 4 (techguru66.com)

5 Most Important E-Sports Events of 2021 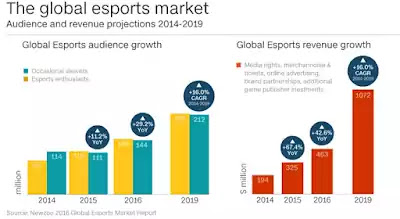 Source(CNN) What is eSports? A look at an explosive, billion-dollar industry – CNN

2) League of Legends World Championship 2021: It will be held in Wuhan, China according to the news.

5) EVO Champions 2021: The largest fighting game community is finally returning this year after a scandal in 2020.

The recent 2019 results show that the eSports betting business was concentrated in Europe (47.72%), followed by China (21.23%), which was strengthened by its internal mobile gaming market.

Note:- In 2018, more than 200 million people watched the League of Legends World Championship final. you know that??

So, what about the Future??

In the upcoming future, esports will alone worth $1.6 billion by 2023 as per the news.

Thanks for reading this article…